Will has almost two decades of experience working within the MRO supply industry. At Hayley Group, he is responsible for the purchasing of tens of millions of pounds worth of power transmission stock to service the needs of our customers.

V-belts are often referred to as “classicals” as they are the oldest (vulcanised rubber v-belts invented by John Gates in 1917), and the most commonly employed drive belt for power transmission. The mainly metal alternative power transmission option incorporates the use of chain and gears. However, in the 1940s came an innovation to belt-based transmission that was intended to tackle some of the main issues and pitfalls of using either v-belts or chain; the synchronous belt.

Also known as ‘timing belts’, power is transmitted in synchronous belts through positive engagement between the belt’s tooth profile and corresponding grooves in sprockets, mimicking the relationship in chain-driven transmission. Their range of attractive features and benefits mean that they have become a popular option for applications ranging from heavy industry machinery to home appliances. Here, I wanted to highlight a selection of the advantages of using synchronous belts.

A problem with the traditional v-belt is that they are prone to slippage. In applications where input and output shafts need to be synchronised, slippage can result in a whole host of problems including spillage of materials, system blockage, and motor damage, and so needs to be keenly avoided. The positive engagement between the tooth profile on the belt and the pulley means that the potential for slippage is eliminated, enabling the synchronisation of shafts where it is required and bringing about other benefits (e.g., a reduced maintenance burden, discussed later) as a consequence in applications where it is not.

The correct tension is a key part of the operating requirements for v-belts that rely on friction to transmit power from a primary source to a secondary driven unit, rather than the meshing of teeth and grooves required of synchronous belts. Following installation, the set level of tension in the latter tends to remain for a lengthy period of time, certainly longer than in v-belts where generally, tension must be frequently checked. In applications where a v-belt is changed for a synchronous belt, users can enjoy the reduced amount of maintenance needed, saving them both time and money over the course of the product’s service life. With this self-sufficient performance enabled, the risk of human error during maintenance, as well as any potential risks to personnel carrying out maintenance work is minimised.

In terms of an advantage over regular transmission chain, which often also gets substituted for synchronous belts, no lubrication is required to enable the problem-free operation of the latter. This fact also enables a lower demand for maintenance, saving users considerable time and certainly money, especially if a facility is operating multiple systems that are suitable for switching to timing belts. With no oils or greases needed, cleanliness is also improved, removing the risk of contamination to product and/or the environment.

Synchronous belts replacing chains also remove one of the main causes of wear (increasing maintenance intervals) and noise (increasing health and safety considerations for staff) in the latter. Instead of wrapping around the sprocket by means of articulated metal parts, they wrap around by flexion. This helps to prolong the belts’ service life beyond that of regular transmission chain, and reduces maintenance burden throughout it.

3. Lessen impact on other components

Upon installation, synchronous belts require only a low tension as they are wrapped around pulleys by means of flexion, and usually no retensioning thereafter. This means that, when compared to v-belts, less stress is applied on other components in the drive train like bearings and shafts. The unnecessary stress on bearings caused by belts being installed too tightly can lead to premature failure of the bearings as well as motors. This means that synchronous belts provide peace of mind when it comes to the impact that the belt or chain are able to have on surrounding components.

Synchronous belts suffer less energy loss than v-belts. In belt drives, energy loss is separated into two categories, torque loss and speed loss. The friction which v-belts depend upon generates heat, and this represents a source of torque loss, as does the amount of energy required to bend a generally thicker and heavier v-belt around a pulley. Thanks to the positive engagement principle that synchronous belts use and their thinner cross-sections, less friction generates less heat in these belts and they also require less energy to flex around the pulleys in the driveline.

Speed loss is also a characteristic of v-belts, and this is a result of their tendency to slip. Generally speaking, V- belts elongate over time, hence the need for regular retensioning to avoid too much slip and maintain performance. Although properly maintained v-belt drives can run as high as 95-98% efficient on installation, it is accepted that this deteriorates by around 5% during operation. Those that have not been effectively maintained could be running up to 10% less efficient. In comparison, synchronous belt drive systems remain at 98-99% over the entire life of the belt.

As a general rule-of-thumb, synchronous belts carry a higher price tag than their v-belt counterparts, and in no way should v-belts be dismissed for every application as they have their own benefits. This list of benefits would include their ability to allow for a degree of slippage, as this is sometimes desirable, especially when the relatively inexpensive belt is acting as a safety fuse, sacrificed instead of more expensive elements of the drive train.

However, with their improved durability and efficiency, as well as their low tension and lubrication-free requirements, both maintenance and energy costs are far less than that of standard v-belts or chain alternatives across their service life. With synchronous belts often lasting and remaining operationally efficient for longer, payback on the initial investment in many cases, is often a relatively quick one. 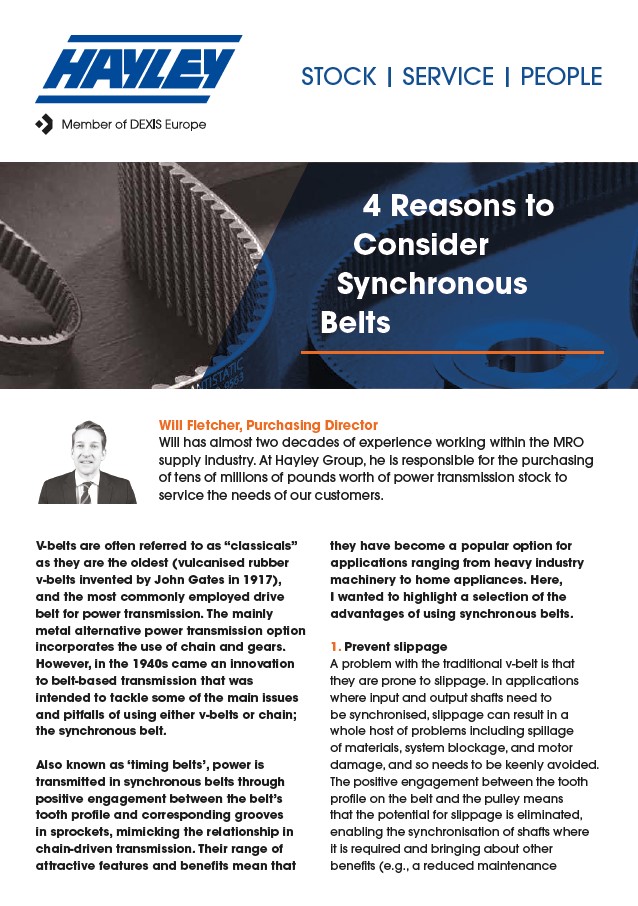 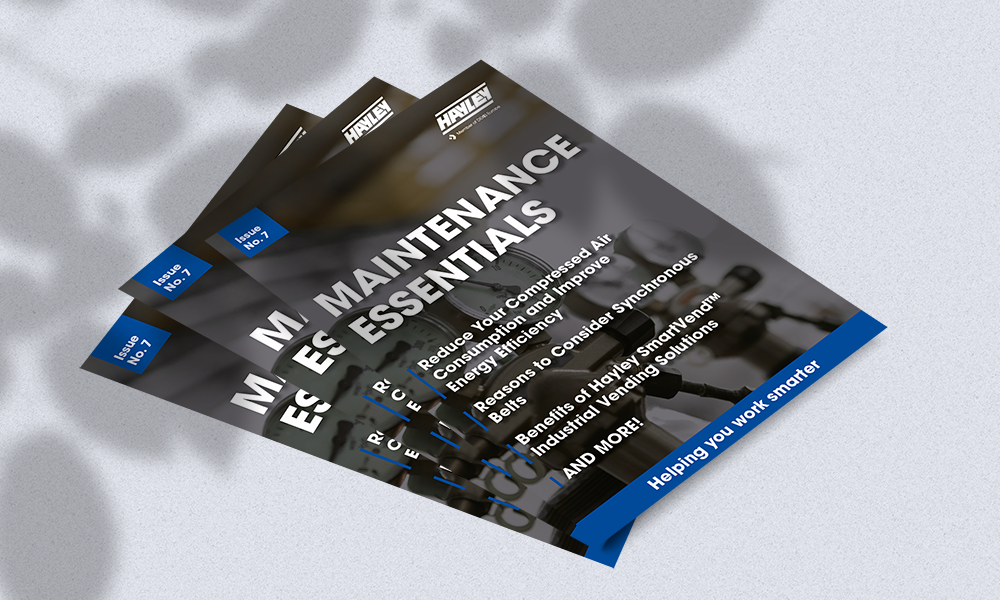 This article features in Issue 7 of Maintenance Essentials. Hit the button below to access a digital copy.