Ian heads-up the tools & industrial division at Hayley Group. The team responsible for supplying tools, janitorial and cleaning products, and adhesives to our customers via the nationwide branch network. Ian has spent his entire career working in the supply of tools and consumables to industrial customers.

Fasteners are an essential part of most machinery, however, because of their size and ubiquity, they are often overlooked. Their role involves holding together critical parts, and due to this, they remain the most important detachable hardware in mechanical design and assembly. Despite centuries of improvement since its invention in Ancient Greece, the threaded fastener still retains some of its weaknesses when it comes to being subjected to external pressures such as intense vibration or excessive heat. There has been much innovation in the threadlocking technology space in recent years to tackle these issues, with LOCTITE® at the centre of this. In this piece, I wanted to highlight some of the main advantages of using a product that itself has been around since 1953, the LOCTITE® Threadlocker.

By applying threadlocking adhesive to fasteners, the danger of self-loosening can be all-but eliminated. The self-loosening process is caused by the lateral sliding motion between contact surfaces on the fastener, prompted often by the repeated small movements of vibration. Mechanical solutions (e.g. spring washers and nylon insert nuts), developed to combat this do exist, but can add considerable cost, and also cannot physically maintain clamp load and prevent loosening over long periods.

On the contrary, threadlockers from LOCTITE® effectively fill the gaps between engaging threads and bond thread roots to avert the dangers. They can cure in the absence of air and in contact with the metal elements, to form a tough thermoset plastic, maintaining friction between threads and preventing movement. As there is typically only 15% metal-to-metal contact between male and female threads, the remaining 85% represents a real point of weakness. LOCTITE® threadlockers effectively tackle this problem. A fastener treated with an appropriate product can sustain the vibration for a vastly longer period, improving the integrity of the fixing, and by extension, the reliability of surrounding equipment. Using a product such as a high-strength LOCTITE® 270 Threadlocker, maintenance engineers can ensure that fasteners don’t wriggle free over time and cause a breakdown on the production line. As a result, the negative consequences of mechanical failure such as breaks in productivity, risks to staff wellbeing, and hits to revenue, are prevented.

Similar to the way that continuous small movements can cause the loosening of fastener assemblies, a sudden force can have the same impact. The sudden altering of loads applies a force onto the bolt or joint, and can lead to bolt threads slipping relative to the threads of the joint. This movement can instigate the unwinding of the bolt, ultimately concluding in the disassembly of components. By applying a LOCTITE® Threadlocker, the clamping force is maintained, making the assembly significantly more resistant to shock.

3. Seals against corrosion and leakage

The sealing effect of a threadlocker improves the resilience of the assembly in environments where they are exposed to liquids. For instance, LOCTITE® threadlockers are used in severely adverse conditions where threaded assemblies are installed in applications involving water currents and vibration, such as in ship propellers. The sealing properties of a threadlocker also help keep fluids in and corrosion out in throughbolt assemblies common in gearboxes and internal combustion engines. Threadlocking products, therefore, offer an unrivalled solution for improving the reliability of assemblies, increasing operational safety, and extending component service life, even in the most challenging environments. The sealing property of LOCTITE® threadlockers also helps to prevent the galling and seizing of the metal components, allowing a reliable and straightforward disassembly when required. Galling hampers the ability to disassemble, as bolt threads become seized to the threads of a nut or tapped hole, making it exceptionally difficult to remove the fastener without cutting or splitting.

Like with vibration and shock, heat stress is also a key cause of fastener self-loosening. Threaded assemblies subjected to temperature variation are therefore at risk of leading to mechanical failure and/or creating a serious safety hazard as components become separated over time. The most common mechanism for the unintentional loosening of bolt joints is considered to be the expansion difference between inner and outer threads, with the expansion inducing radial stress and weakening friction torques before causing loosening. Threadlocking adhesives from LOCTITE® provide a superior level of heat resistance and can continue to operate effectively in temperatures ranging from -55°C to +180°C. Their ability to maintain the clamping force of assemblies directly tackles the problems instigated by differential expansion caused by thermal stress.

As I previously alluded to, component-based solutions for preventing fastener failure, such as double nuts and spring washers, can come at a significant cost to businesses. All of these conventional systems also require stocking/ storage facilities for the different dimensions required across the breadth of equipment being used. Spring washers and nylon insert nuts are non-reusable, and therefore represent an option that is both costly and wasteful, while the toothed flange bolt alternative is high cost and can also cause damage to the mating surfaces. The LOCTITE® threadlocker range presents a one-product solution for all fastener shapes and sizes.

The only choice is between either a medium or high strength adhesive. With a single 50ml bottle of LOCTITE® sufficient for 800 M10 fasteners, the cost-savings are self-evident. Not only this, the burden on any available storage space is minimised with fewer rejects and returns also having to be processed as a result of not using conventional systems.

In conclusion, LOCTITE® threadlockers maintain the clamping load of threaded assemblies, preventing the self-loosening process often caused by vibration, shock, or thermal expansion. They are not only more effective in reducing the risks of loosening than conventional component-based solutions, but also represent a more cost-effective method to preserve the integrity of machinery and uphold the safety of personnel working nearby. 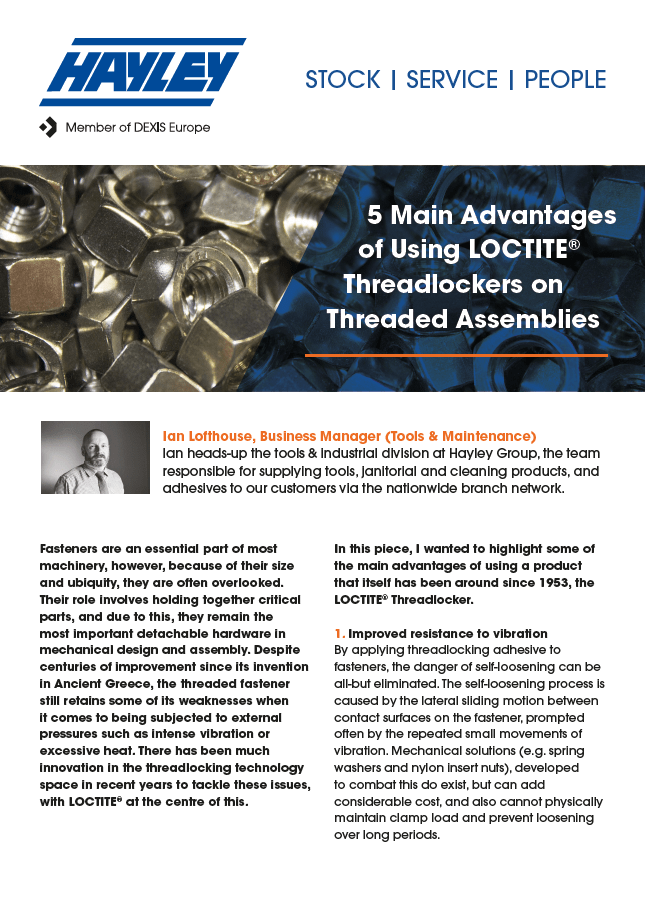 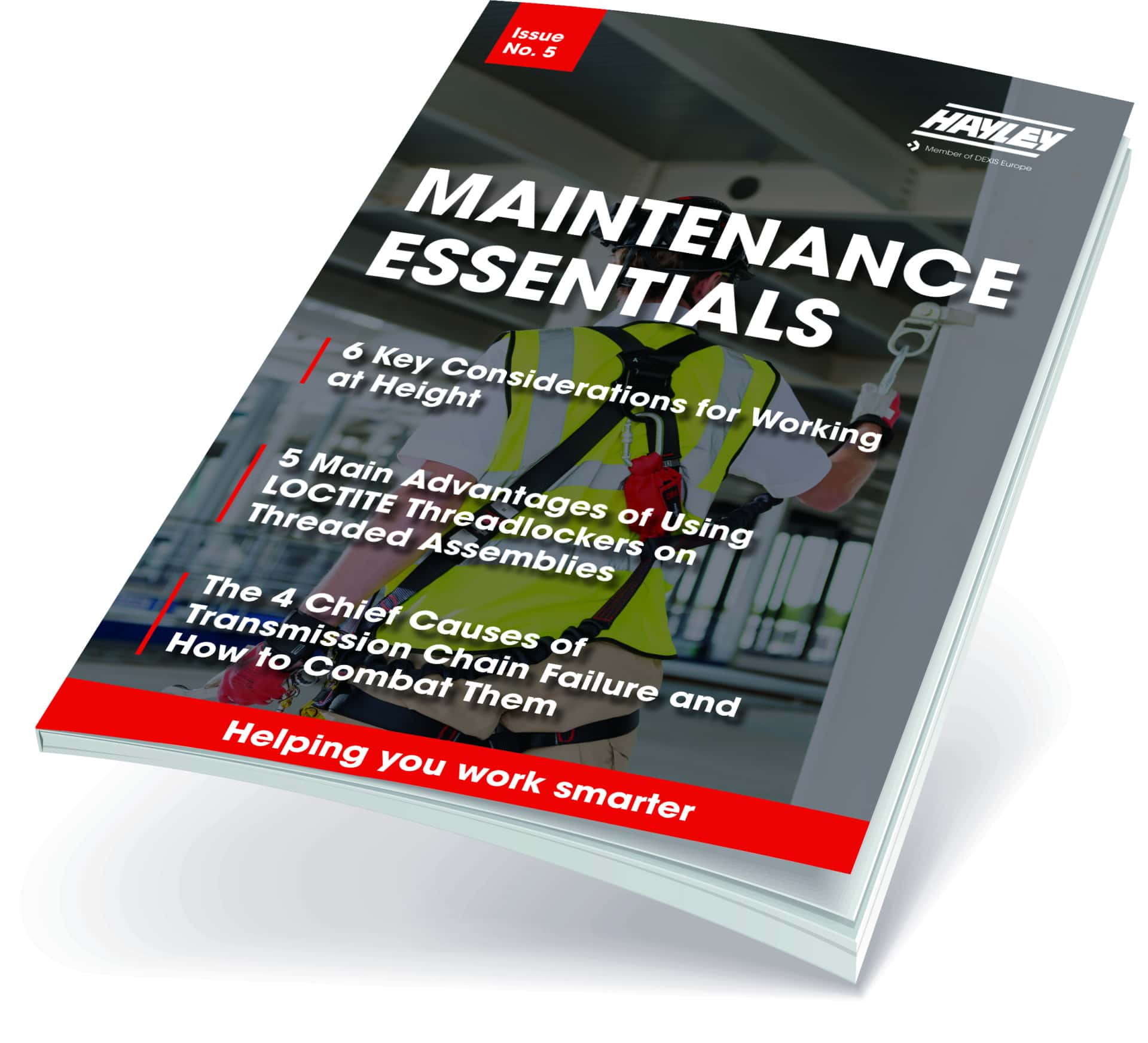